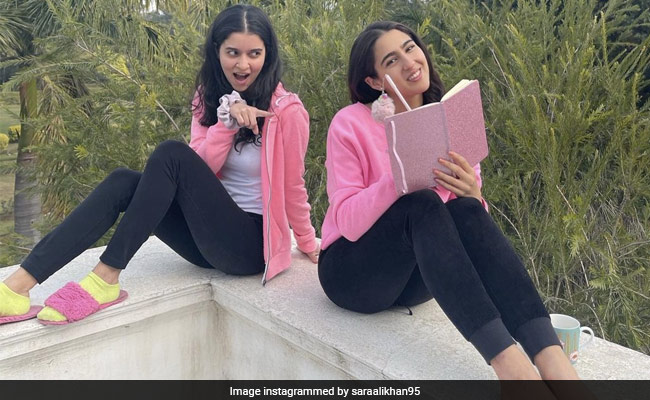 New Delhi:
Famous Bollywood actress Sara Ali Khan always remains in the headlines for her photos and videos. She has left no stone unturned to win the hearts of the people with her style. Recently, Sara Ali Khan has shared some pictures with her best friend Sara Vaisoha, in which both best friends are seen in the same dress. Sara Ali Khan and her friend’s style looks very cute in the photo. Both are seen sitting on the terrace balcony reading the book and having fun. Sharing these pictures, She also wrote a cute note for her best friend.

She shared a photo with her best friend, writing, “You are a chocolate chip in my life’s cookie. I am already remembering our chip and dip nights.” In the photo, both are seen in the best friend pink jacket, white top and gray leggings, in which their look looks quite tremendous. In a picture of the actress, where she is seen looking at the camera with the book in her hand, her best friend Sara Vaisoha is seen pointing towards her book. At the same time, in the next photo, Sara’s book is seen in the hands of her best friend.

This photo of She and her best friend has been liked more than 7 Million times so far, as well as fans are commenting fiercely on it. Talking about her work front, the actress recently appeared in Coolie Number One with Varun Dhawan. Sara and Varun played the lead roles in this film. Apart from this, She will also be seen in ‘Atrangi Re’ soon. In the film, she will be seen in the lead role along with Akshay Kumar and Dhanush. Shooting of the film is still going on.
42